The exhibition offers a rare opportunity to experience the full spectrum of Walters’ sophisticated abstraction. It includes more than 130 artworks: from the early surrealist drawings of the mid-1940s and colourful gouache paintings of the 1950s, through to the visually complex koru series of the 1970s, and the later, refined geometric works.

Gordon Walters: New Vision begins with the surviving paintings first seen in Walters’ milestone 1966 exhibition at Auckland’s New Vision Gallery, when Walters chose – after many years of working in isolation – to make his abstract artworks public.

With unprecedented access to the private archives of the Walters Estate, this exhibition is the first comprehensive survey of the artist’s complete body of work, including preparatory sketches and notebooks.

Auckland Art Gallery Director Rhana Devenport says this is the most significant exhibition of Walters’ work to date.

‘Rarely do we see such a complete exhibition of an artist’s practice. Many of these works have not been seen since they were first exhibited by Gordon Walters as far back as the 1940s. Some have rarely been on public view and are drawn from New Zealand and international collections, including those privately held.’

‘Developed in close partnership between Auckland Art Gallery and Dunedin Public Art Gallery, Gordon Walters: New Vision has brought together experts from both organisations and beyond to ensure this immensely significant artist’s practice has been thoroughly explored and presented in a new light,’ says Devenport.

‘Many connect Walters’ name with his koru-inspired paintings. New Vision reveals how these profoundly modern and at times controversial works were the culmination of years of work and visual research into the arts of other cultures, which took the artist – both physically and imaginatively – offshore,’ she says.

‘New Vision looks beyond the koru to those forms that were equally significant to Walters’ practice to better appreciate the full extent of his artistic enquiries.’

‘New Vision looks beyond the koru to those forms that were equally significant to Walters’ practice to better appreciate the full extent of his artistic enquiries.
Julia Waite, exhibition co-curator

The Walters Estate’s Gregg Schneideman says the Estate has been delighted to support Gordon Walters: New Vision and the associated research of the exhibition curators and their organisations.

‘The exhibition and accompanying publication present fresh insights and surprising linkages in an approachable and exciting manner, and really do offer new ways of looking at Gordon Walters and his work,’ he says. 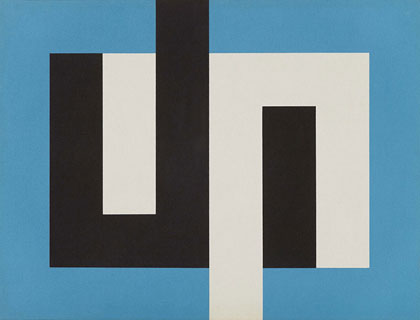 New Vision looks beyond the koru to those forms that were equally significant to Walters’ practice to better appreciate the full extent of his artistic enquiries.