A nightclub singer, a double-murderess, a smooth-talking lawyer and a cell block of sin..... so the story unfolds in the award-winning Broadway and West End musical CHICAGO, which comes to New Zealand in August 2018 and opens at The Civic in Auckland before moving to the Opera House in Wellington in September.

Winner of six Tonys, two Oliviers, one Grammy, two Baftas and six Academy Awards, plus thousands of standing ovations, CHICAGO is the longest-running musical revival in Broadway history, and truly is “The sharpest, slickest show on the block” (The Times, UK).

CHICAGO has everything that makes Broadway and the West End great – a universal tale of fame, fortune and all that jazz; one show-stopping song after another, including 'Razzle Dazzle', 'Cell Block Tango' and 'All That Jazz'; the sexiest, most sensational dancing; and a sharply sophisticated set which incorporates the 11-piece orchestra.

It’s no surprise that this devilishly delicious musical has brought cheering audiences to their feet all around the world, from Mexico City to Moscow, from Sao Paulo to South Africa. An estimated 31-million people have seen CHICAGO, which has played over 30,000 performances worldwide.

Set in the Prohibition-era 1920s, CHICAGO is the story of Roxie Hart, a housewife and nightclub dancer with ambitions of vaudeville stardom, who maliciously murders her on-the-side lover after he threatens to walk out on her. Desperate to avoid conviction, she dupes the public, the media and her rival cellmate, Velma Kelly, by hiring Chicago’s slickest criminal lawyer to transform her malicious crime into a barrage of sensational headlines, the likes of which might just as easily be ripped from today’s tabloids.

CHICAGO is a stunning spectacle full of social satire, intrigue, love, betrayal, rivalry and friendship, a pageant of music and dance that adroitly shifts between reality and fantasy, as Roxie Hart’s world moves from prison to the courtroom to the stage.

Producer James Cundall, Chief Executive of Lunchbox Theatrical Productions says, “CHICAGO is one of the world’s most popular musicals. Unbelievably sexy, sassy and sensational, this musical thrills and chills, which is why it continues to tour the world after so many years and has been applauded by millions of people. So whether you’ve seen the Academy Award-winning film and want to experience the show live on stage, or you have seen it before and want to recapture the magic, here’s your chance."

CHICAGO was first created by the legendary Broadway trio of John Kander (music), Fred Ebb (book/lyrics) and Bob Fosse (co-author, original director and choreographer) in 1975, and was based on a 1926 Broadway play written by Maurine Dallas Watkins, a journalist from the Chicago Tribune who had covered the sensational trials of two women, both of whom were accused of killing their lovers whilst under the influence of drink and jazz.

Kander and Ebb enjoyed a collaboration that spanned four decades, defined musical theatre on Broadway and earned them numerous awards.  Bob Fosse was one of Broadway’s biggest and brightest creative stars, renowned for his innovative and spectacular staging, with the emphasis on exhilarating dance sequences.  He turned out one hit after another from the 1950s to the late 70s and is the only director so far to have won an Oscar, two Tony Awards and an Emmy Award in the same year, 1973.

The 2018 International Tour of CHICAGO is produced by David Ian Productions, Showtime Management, Lunchbox Theatrical Productions and Michael Watt in association with the Broadway producers Barry and Fran Weissler.  Scenic design is by John Lee Beatty, costume design by William Ivey Long, lighting by Ken Billington and sound by Rick Clarke.  Musical supervision is by Rob Fisher. CHICAGO is choreographed by Ann Reinking in the style of Bob Fosse and directed by Walter Bobbie. 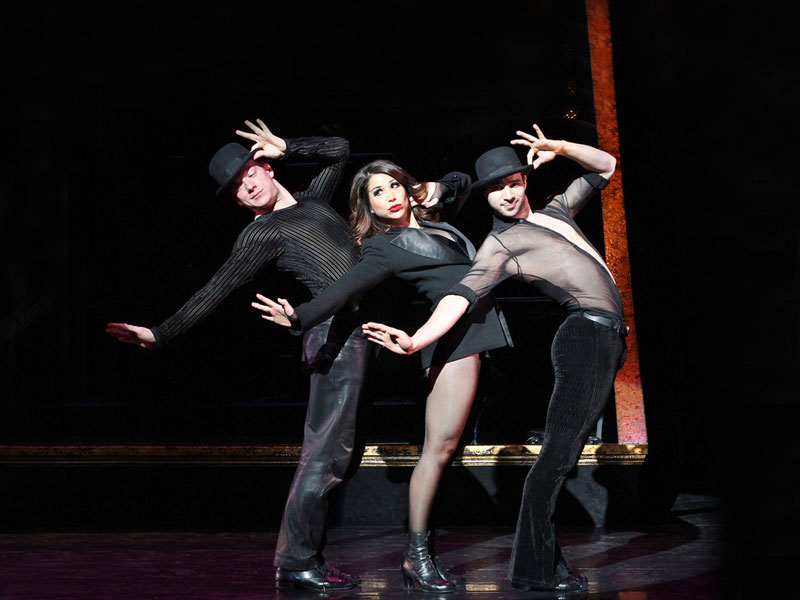 Still the hottest show in town