Regional Facilities Auckland (RFA) is anticipating events hosted at its venues will generate an estimated $53 million in visitor spend this summer – eclipsing all previous records.

Concerts and major events in venues such as Mt Smart and Western Springs stadiums and The Civic are set to attract more than 394,000 people from now to the end of March. Over the next six months, visitors to RFA’s stadium events alone will peak at around half a million visitors.

Of those attending events in the Super City, more than 168,000 will travel from outside Auckland, making the ‘gig economy’ a significant contributor to Auckland’s tourism industry.

The schedule begins in November with Les Misérables at The Civic, and Irish juggernaut U2 kicks off its much-anticipated Asia-Pacific Joshua Tree Tour at Mt Smart on 8 and 9 November.

Foodies in their masses will attend the culinary world’s showcase event, Taste of Auckland, at Queens Wharf from 31 October — 3 November; and a who’s who of the entertainment world will attend the renaming of the Aotea Centre’s ASB Theatre to the Kiri Te Kanawa Theatre on 20 November.

Mt Smart is set to demonstrate its versatility once again, transforming for the second year for New Zealand’s largest international Supercross and off-road motorcycling event, the Monster Energy S-X Open on 16 November.

Watch our Summer Showreel for the highlights

Art and design enthusiasts are also well catered for this summer, with Auckland Art Gallery featuring work by one of New Zealand’s most important artists in A Place to Paint: Colin McCahon in Auckland; the first major survey of work by French-born, New Zealand artist Louise Henderson, Louise Henderson: From Life; and the international Denmark Design exhibition opening 26 October. At the New Zealand Maritime Museum, Tākiri: An Unfurling brings together the work of seven contemporary artists to explore early Maori and European encounters.

For family-friendly entertainment leading up to Christmas, the delightful Roald Dahl’s Revolting Rhymes and Dirty Beasts is on at the Bruce Mason Centre from 21—23 December, featuring hilarious twists on the world’s best-loved fairy tales.

To make the most of the long summer nights, Auckland Zoo will stay open late on selected dates from mid-January through to early March. These provide the perfect opportunity for wildlife and conservation-loving adults to head to the Zoo and help build a future for wildlife.

The new year concert line-up starts on a high note with the invincible Fat Freddy’s Drop occupying the outer fields at Western Springs on 18 January. Seven-time Grammy Award winner and Empress of Soul Gladys Knight will perform at The Civic on 13 February, while New Zealand’s favourite band Six60 returns to Western Springs Stadium on 22 February for a second sold-out concert in as many years.

The exciting celebration of people, places, culture and art that is Auckland Arts Festival will see more than 1,000 artists showcase theatre, music, cabaret, dance and visual arts throughout the city for 19 days in March – many in RFA venues. An anticipated Festival highlight, high fashion will meet iconic fairy tale in the darkly delectable retelling of Snow White at the Aotea Centre from 11 – 15 March.

No Auckland summer is complete without blockbuster musical theatre. The hotly anticipated international phenomenon The Book of Mormon, by the creators of South Park, arrives at The Civic in March. For the family, the magical high-flying musical that is practically perfect in every way, Mary Poppins, lands at the Bruce Mason Theatre in April.

RFA Chief Executive Chris Brooks is delighted Auckland has firmly established itself as the entertainment capital of the country and that RFA’s venues are so popular among the world’s biggest promoters.

Over the last eight years, we have successfully positioned Auckland as a vibrant summer entertainment destination where you can attend major international touring concerts, blockbuster musicals, exhibitions and festivals.

“This has a significant flow-on effect for Auckland’s economy, including the accommodation, hospitality and tourism sectors. It is extremely rewarding to see the huge economic and cultural benefits our activities bring to the city and this summer will be our biggest yet,” says Brooks.

For Taste of Auckland, the Monster Energy S-X Open and U2, RFA has worked with fellow CCO Auckland Tourism, Events & Economic Development (ATEED), whose sponsorship supports the significant economic returns these events will generate. 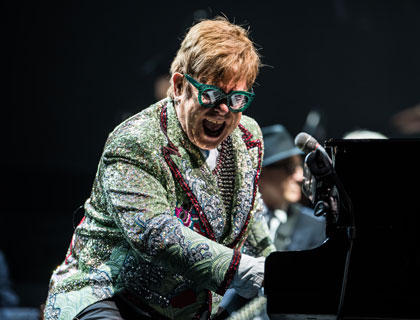 "It is extremely rewarding to see the huge economic and cultural benefits our activities bring to the city and this summer will be our biggest yet."